Being married to a therapist, my husband has participated in his fair share of parenting strategy sessions.  Ok… maybe MORE than his fair share. (This would be an appropriate time to bestow a little sympathy on spouses of therapists everywhere.)

One of our initial co-parenting talks took place while I was pregnant with our first child.  While he sipped his beer and I sipped my hot tea, we agreed that we would avoid using labels with our new baby.  The negative labels (difficult, clumsy, shy, fat, skinny, ugly) are obviously damaging to a child’s developing self-concept and can put the kid in a box that is hard to break free of.  The positive labels (smart, good, beautiful, perfect, athletic) can be equally harmful.  Labeled with these adjectives, a child feels like they have certain high standards that they have to live up to.  If they no longer consider themselves to be “beautiful” or “perfect”, they can feel like they have somehow failed or that they’re not OK.  In fact, ample research has been done on the overuse of the compliment, “smart”.  When children are told continually how smart they are, they begin to feel like everything should come easily to them.  And when they have to work at a task, or God-forbid, fail a few times, these same kids get frustrated and give up easily because it doesn’t fit with their preconceived notion of how smart people perform.

Instead of using the good, the bad and the ugly labels, we agreed to give our kids good ol’ fashioned unconditional love (I love you. Period.) and to focus our compliments and comments on the effort they were putting into their activities and learning (I can see how hard you are working to stack those blocks in a really tall tower. And now you’re putting all of your energy into knocking them over!)  Ok, we don’t always talk like that, but overall my husband and I try to focus more on our children’s efforts and less on empty praise.

The labels that we didn’t prepare for are what I call the big box, or diagnosable labels, such as colic, Autism, ADHD, allergies, learning disabilities, chronic illness, etc.  We weren’t avoiding discussion of these labels… it just didn’t occur to us to bring them up.  I think we assumed (since I was taking my pre-natal vitamins, of course!) that we would never have to use any of these stigmatized descriptors.  There was probably a little bit of pride and stubbornness mixed in there.  But ultimately, we subscribed to the “Why worry until it happens?” philosophy, which I strongly recommend to any expectant or new parent.

So we didn’t worry… until my son was about 3 years old.  That was the age when we began to notice some troubling quirks that we couldn’t ignore.  Aidan had the loudest voice in the room, but couldn’t tolerate loud noises himself.  He was exceptionally rough and violent with his new baby brother, but was extremely sensitive to touch and rough clothing.  Teeth brushing, nail trimming, haircuts and doctor’s appointments were always accompanied by prolonged, blood curdling screaming.  His favorite activities involved burrowing himself into couch pillows or throwing toys around the house.  I won’t even go into the toilet training challenges we were having.  At his 3-year wellness check, when his pediatrician asked, “How are things going?” I almost burst into tears as I listed off the challenges we were dealing with.  That was the first time that I heard about the condition, Sensory Processing Disorder.

Later that day, my wise Cousin Val, an Occupational Therapist in Australia, confirmed the doctor’s suspicions via e-mail and gave us a long list of suggestions.  Thus began a series of bi-weekly OT sessions for Aidan, or what he considered to be fun gymnastics in a place we called the “Playhouse.”  No time was wasted – we were ready for some help.  We surprised even ourselves with our rapid acceptance of the Sensory Processing Disorder diagnosis when we so vehemently rejected labels in the past.   Looking back, there were three reasons why the label of SPD saved our little family:

It gave us understanding.  Suddenly Aidan’s extreme sensitivity to everything under the sun made sense.  His explosive behavior and tendency to want to squeeze himself and everything around him also had an explanation.  Instead of feeling continually frustrated, we had a framework to understand our child’s behavior and we could offer more compassion and patience. 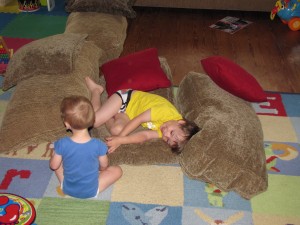 It gave us tools.  Now we had more than time-outs and reasoning to help our son work through his challenges.  When he seemed edgy and explosive, we threw couch pillows on the floor and let him dive in and channel his destructive energy.  Massaging or “brushing” his body helped him to release the negative tension.  Squeezing him between pillows (similar to Temple Grandin’s hug machine) or giving him weight-bearing exercises also helped his body to regulate.  We bought sound-blocking headphones, softer clothing, and made sure he got plenty of sleep and minimal sugar.  The more we consciously regulated his environment and triggers, the more his body “toughened up.”

It gave us relief.  My husband and I got to trade in our “Worst Parents EVER” badges for “NO WONDER We Were Struggling!” t-shirts.  The more we learned about SPD, the more we realized that Aidan was dealing with a fairly common condition that could be managed and remedied.  We learned that approximately 30% of so-called gifted kids (oops, there’s a label) deal with some form of sensory issues.  The diagnosis of SPD enabled us to let go of some of the self-blame and shame we were struggling with and reinvest our energy into learning about Aidan’s condition and helping him to recover.

Parents as a whole feel SO MUCH pressure to get everything “just right” and raise kids who are relatively perfect.  Sometimes letting go of our fear of labels and acknowledging issues when they arise can open the floodgates for support and information.

Today our son is a 4th grader who, for the most part, has outgrown his sensitivities.  We still make sure he gets plenty of sleep, healthy food and consistent routines.  We still throw in sound-blocking headphones when we’re going to see fireworks or a concert.  Just like other parents we limit his screen time and make sure he gets regular exercise.  If you asked Aidan about Sensory Processing Disorder, he would say, “Huh??”  He doesn’t identify himself with that label.  As far as he knows, he is a normal 9 year old who occasionally drives his parents crazy.  Mission accomplished in our opinion.  The label we used to understand and help our child is the last descriptor he would use to define himself.  And that is the kind of label our family can buy into.

Here’s to Sanity and Pillow-Diving,