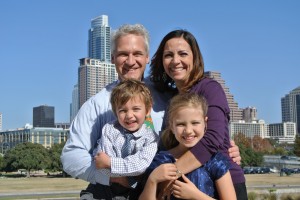 Claudia and her family.

Meet Claudia Kramer Santamaria.  She is a lifelong educator who has worked as a teacher, elementary principal and currently, the Supervisor of Parent Programs for Austin Independent School District.  We asked Claudia to share about  her experience of immigrating to the United States from Uruguay as a child. We also wanted to learn about the powerful decision she and her husband made to raise their children in a multilingual and multicultural environment.  Claudia has loads of wisdom to share and we are so grateful to feature her on Baby Proofed Parents today. ¡Bienvenido Claudia!

BPP: You are a fully bilingual adult with no audible accent, so people might not realize that you were born in the South American country of Uruguay. How old were you when you moved to the states? Was it challenging acclimating to the American culture as a Spanish-speaking child?

CKS: I was 5 years old when I came to the United States from Uruguay.  I had learned my basics in Kindergarten, in Uruguay, so English is definitely my second language.  I grew up in a very multicultural and multilingual area of Queens, NY and although I lived with people who spoke many different languages, the schools that I attended were English-only.  I remember coming home crying with massive headaches as a 1st grader, unable to understand or speak the language spoken all around me.  It’s still painful to think back to that time of my life; I cried everyday to my mom – begging her to not send me to that place (school). When I moved from Queens to Houston at the age of 13, it was like moving back in time. This time it wasn’t a language barrier but one of cultural identity – I was an outcast in both the “white world” and the “Mexican world” because I didn’t neatly fit in either category. I  found that experience to be equally heart breaking.

BPP: Can you share about the decision that you and your American-born husband, Benjamin, made to raise your children with Spanish as their first language while living in Austin?

CKS: As a result of my struggles to find my identify in the American and Texan worlds, my immigrant identity became stronger!  I held on to the culture, language, music and food of Uruguay.  I have my parents to thank for this. We only spoke Spanish at home, watched Spanish TV channels and interacted with Latino family friends.  My husband, Benjamin, had lived in Ecuador for two years and had an understanding of the Latino life and language. That was an important characteristic that I looked for in a future husband. When we married and talked about children, I shared the need to make sure that our children rooted themselves in the language and culture of both parents.  Benjamin understood that they would gain the English culture and traditions just by living here – so he agreed to help me establish the Latino culture in our children.

BPP: How did you introduce your children to English when Spanish was the predominantly spoken language at home? How have they benefited from being bilingual?

CKS: Not much effort was needed to introduce our children to English – they are surrounded by the language. They were exposed to English by their friends, TV, movies, music, and of course school.
The benefits of being bilingual include being able to experience two worlds of language, culture, music, and traditions. We travel to Uruguay frequently so they may continue their relationship with their Spanish-speaking family.  They are able to have an authentic relationship with my father who lives in Uruguay and speaks only Spanish. They can read stories in two languages. In fact, we have introduced Mandarin to both children through an after school program.

BPP: When your young children began interacting with other kids and adults, out and about in Austin, did they struggle with a language barrier? Have they encountered any speech, comprehension or reading difficulties due to being bilingual?

CKS: At first, when we were out, they would look to us for help or explanation. I think other people were struggling to understand why Ben and I were doing this to our children! As kids, they never struggled – they would look to us to translate and then tell us what they wanted to say or experiment creatively with the language.
My daughter, Sophia is now above her grade level in reading and writing in both English and Spanish. She is only eight years old, but can read Harry Potter in both languages. She also speaks beginning Mandarin beautifully. Fernando is even more advanced in all three languages!

BPP: Your children now attend a dual-language school where they learn in both Spanish and English.  Can you share about how their school is unique and how they incorporate the two languages?

CKS: Sophia has 50% of her instruction in English and 50% of her instruction in Spanish.  Our school district uses the Gómez and Gómez Dual Language Enrichment Model. You can read more about this system and its protocols at this link.  Unfortunately my daughter’s art, music and PE classes are all in English, since the teachers speak English only.  Ideally we would love her social interactions to be in both… but they are predominantly in English.  She has a “bilingual pair” whom she works closely with throughout the day – one child is a native Spanish speaker and one child is a native English speaker.  The goal of the dual language program is that by the end of 5th grade, children will be bi-literate and bi-cultural.

BPP: As you raise your two children in America, do you notice any cultural differences between South American and American child-upbringing practices? Do you incorporate any traditions or practices into the upbringing of your own children?

CKS:  We are lucky as a family to stay very connected to Uruguay by traveling there every few years and staying there a minimum of two to three weeks.  Hence, we are constantly learning more about South American traditions, food options, music, and books.  These experiences help us to hold onto the South American culture and language.
We have the tooth fairy AND the ‘ratoncitos’ (little mice that come to get your tooth at night).
We celebrate Christmas AND ‘El Día de los Reyes’ (The Day of the Three Kings.) We also celebrate Chanukah for that matter!
We sing songs and rhymes from Uruguayan children’s books and CD’s.  And of course, we read to them from Mother Goose!

BPP:  For English-speaking parents who do not speak a second language, how and when do you recommend that they introduce their children to another language? What do you think are the advantages to exposing young children to multiple languages?

CKS:  I have studied and applied Bilingual Education practices for over 20 years and I can honestly recommend that sooner is better to introduce a child to a second or even a third language. The earlier, the better.  There are a number of reputable Spanish/French/Mandarin Immersion day cares in Austin (and most other cities) that parents can research.  In addition, our school district here in Austin now has twelve dual-language schools that teach children in the Gómez model from Kinder – 5th grade. 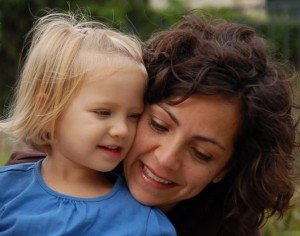 BPP: You have been, and continue to be, a life-long and influential educator. Have you found that your experience and expertise as an educator has impacted how you parent and raise your children?

CKS:  My educator experiences have incredibly influenced my parenting, especially in this area of language acquisition. With my first born, I felt I was doing some sort of ‘experiment’ to see if in fact a Spanish-only environment would help or hinder my daughter’s English language acquisition… but what I learned as a teacher and a principal held water.  The ‘power language’ – the language in the greater environment, outside of the home – will always prevail.  That is why parents must be strategic and focused on applying experiences for the children in the 2nd and 3rd languages that you want the child to learn.  We are constantly thinking about how to have a Chinese influence in Sophia’s life since her only exposure is twice a week at the Chinese school.  We are actually going to China for 14 days this summer so that she can attend a Chinese school.  The commitment to the languages we want our kids to learn must be REAL.

BPP:  If you had to give one sanity-saving tip to an expectant or new parent, what would it be?

CKS:  Pick a language other than English that you want your child to learn.  Begin your research NOW on how to expose him/her to that language.  And let the fun begin!

Thanks for sharing your inspiring story and expertise with us Claudia! You are a true example of someone who lives and parents according to their values and traditions. – C & K ♥