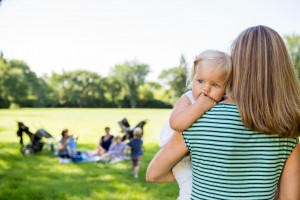 This week an influential health panel, the US Preventive Services Task Force, issued new recommendations regarding maternal mental health, stating that all women should be screened for depression during pregnancy and after childbirth.

Mothers and mental health care providers everywhere rejoiced. Being a mom and a therapist myself, I was doubly overjoyed. Ten years ago, I was a new parent who was shocked at how little questioning and support I received regarding my postpartum mental health from both my obstetrician and pediatrician. They gladly gave me info on my healing episiotomy and my clumsy breastfeeding technique, but they seemed to quickly change the subject when I brought up the anxiety or postpartum distress I was experiencing.

Things have improved in the last ten years. More and more new mothers with perinatal mood disorders are referred to me for professional counseling via their doctor or their insurance provider. More childbirth educators and birth professionals are coaching their clients on how to care for their emotional and relationship health prior to bringing a baby into the world. Thanks to organizations like Postpartum Progress and Postpartum Support International, awareness is building and PPD is losing its stigma and gaining support.

But we still have a long way to go. Studies suggest that one in seven, and possibly as many as one in five women develop symptoms of depression, anxiety, obsessive-compulsive disorder, psychosis or a mixture of all four during pregnancy or after childbirth. Many mothers, as many as 70%, are left undiagnosed and untreated. Some women lose their life as a result.

Knowing these facts, it makes sense that an army of indignant parents responded to Marianne Williamson, a New York Times bestselling spiritual author and speaker, when she tweeted the following earlier this week:

U.S. Preventive Services Task Force says pregnant women should be “screened for depression.” How many on Task Force on big pharma payroll??

And then, in later comments, followed up with this:

Hormonally created, normal mood swings during and after pregnancy are not a disease. Meditation helps. Prayer helps. Love helps.

You might wonder why a few tweets from Williamson caught so much attention. The truth is that her comments are representative of a more widely-held opinion that postpartum mood disorders are simply a normal part of parenthood. Many believe that long-lasting depression or anxiety is only experienced by mothers who are not taking care of themselves or are weak.

The backlash was immediate and fierce. “Warrior moms” lead by the passionate Postpartum Progress founder, Katherine Stone, filled the Twitter-sphere with hundreds of comments accompanied by the hashtag #meditateonthis. Their statements argued that postpartum depression is an extremely serious, sometimes fatal condition that frequently calls for more than meditation, prayer and love.

Aarti Sequeira ‏(@aartipaarti): Wow @marwilliamson. Have you suffered from PPD? It is so much more than a “rough day”.

Alena (@Alena29): The bonus benefit to screenings is educating doctors and breaking down doors to get information in more hands. #meditateonthis

TiffanyDolci (@TiffanyDolci): @marwilliamson #meditateonthis I would not be here today to fight the #stigma you’re creating without my #medication #ppd

Amanda Magee (@AmandaMagee): If you hurt, there’s pain If you ache, there are wounds Need help? You deserve help You aren’t broken, you are fixable. #meditateonthis

Katherine Stone (‏@postpartumprog): Every #PPD mom doesn’t need medication. But she does need to be recognized. And helped. #meditateonthis 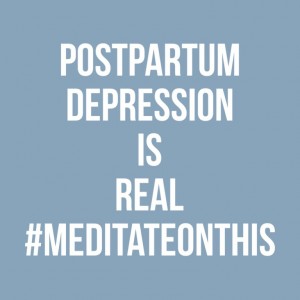 These women (and a few men) brilliantly and fiercely argued that PPD is about more than feeling a little sad. While “baby blues” are a common hormonal adjustment that typically last no more than two weeks, perinatal mental illness is vastly more critical and can have devastating consequences if left untreated.

I can vouch for this. I’ve worked with hundreds of women who have sat in tears in my office discussing the emotional difficulties they are experiencing during a pregnancy or following the birth of a child. Yes, meditation and mindfulness can help. Yes, prayer, yoga and of course, love can ease someone down the path to recovery. But there are times when a more serious intervention is called for. Cognitive-behavioral therapy, medication and sometimes hospitalization might be necessary and even life saving.

If I could chat with Williamson, I would share the story of a mother in my community who suffered from postpartum psychosis. Her house was full of loving family members who were offering her support and prayer. Tragically, this women’s obsessive thoughts and delusional thinking led her to hang herself in her bathroom, whilst her family was in the living room, giving her a breather from caring for her newborn. It’s impossible to ask “what if?” questions after a shattering loss such as this, but the ultimate hope is that more screening of women will lead to more immediate treatment and less pain and heartache for families every where.

Postpartum depression and other perinatal mood disorders are serious business. We CANNOT afford to go backward in our efforts to destigmatize this condition, raise awareness and make diagnosis and treatment more available to women every where. As Avital N. Nathman from The Mama Festo tweeted:

A call for more screening DOES NOT = more meds. It means more providers being trained properly to look for #PPD & help #meditateonthis

Who can possibly argue against that?